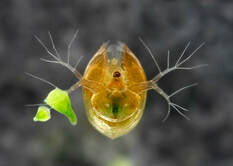 Daphnia, photo by Judy Semroc
Vernal pools are populated by dozens, if not hundreds, of small organisms that are not vertebrates, so called because they do not have backbones like frogs and salamanders. Those that can be seen without magnification are collectively known as macro‐invertebrates (macros). The largest macros of vernal pools are crayfish and dragonflies that, as adults can grow to more than three inches in length. Others range in size down to the tiniest speck.


Life History Strategies
Macroinvertebrates are especially suited to life in temporary waters. Many of them become active in winter, even below a layer of ice. One life‐cycle strategy is to hatch very early, mature, breed and lay eggs that will become dormant until the next season. Fairy shrimp, that only live in vernal pools, are the premiere example of this strategy. Other macros only use vernal pools to lay eggs and feed as they grow, but later leave the pool as adults before the waters dry down. Many insects, including dragonflies, damselflies, beetles, bugs and flies use this strategy.

Predaceous Diving Beetle Larva , photo by Judy Semroc
Predator or Prey?
Some macroinvertebrates, such as dragonflies, produce predaceous larvae that dominate the vernal pool. Others like flies, including mosquitoes, reproduce in large numbers, most of which become victims of predator species before making it to adulthood. Where there are salamander and frog tadpoles, dragonfly and damselfly larvae, predaceous diving beetles and other macro‐ predators the vulnerable mosquito larvae are simply a rich food source. Degraded vernal pools that lack diversity are more likely to produce mosquito pests in quantity.
Food Web
It is often said that vernal pools are fueled by detritus, fallen leaves, limbs and other plant materials that fall to the forest floor. To digest these coarse resources a variety of organisms are engaged. Microscopic algae, fungi and bacteria often initiate the process. Then, the macros come along in many sizes and shapes with an array of skills and appetites. There are shredders, nibblers, and scrapers with unique appendages and mouth parts that collectively transform dead material into living tissue. As these organisms are eaten by predators and then, even larger predators the nutrients and energy of the cast‐oﬀs from previous years become the building blocks of a fresh new spring.


Upland
Macros are key players in the enrichment of a wet forest. They carry forest floor resources with them throughout the forest and adjacent waters. They are more than curiosities; macros are intermediaries in the story of a larger ecology where they recycle nutrients and subsequently feed the wildlife that we humans are more likely to notice.