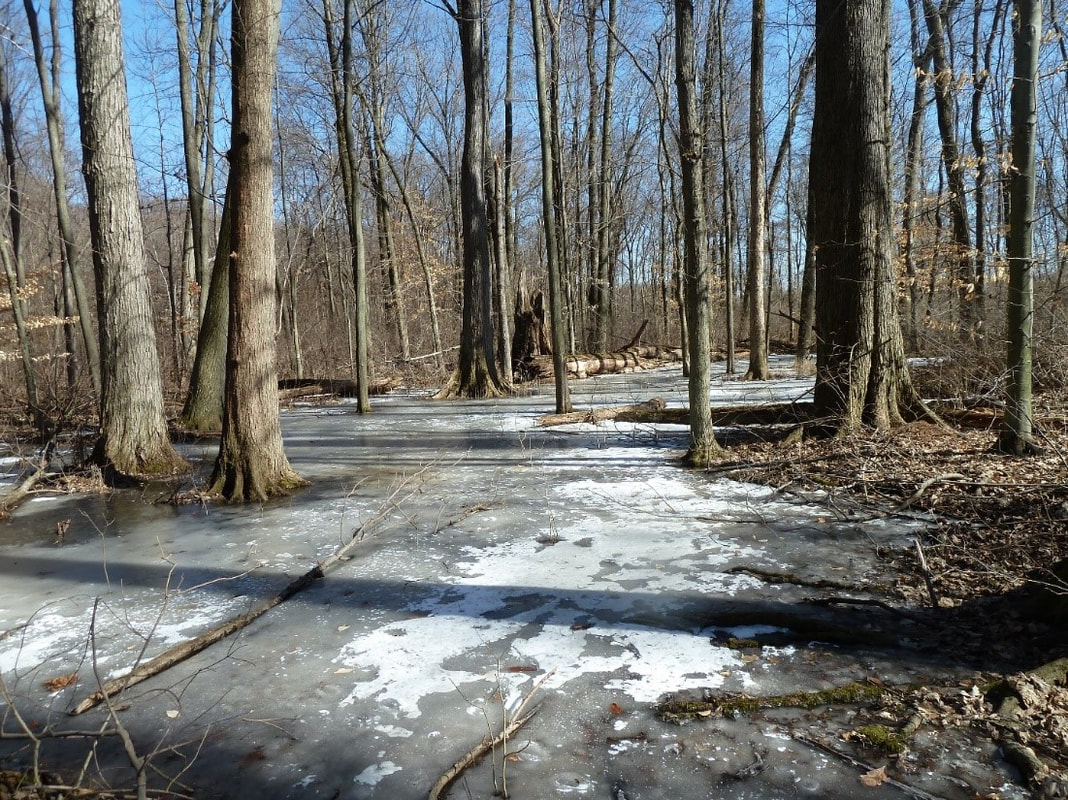 Where are Ohio’s Vernal Pool Amphibians in Winter?
It is winter, very cold, snow covers the ground, and ice is on lakes, streams, ponds, and wetlands, including vernal pools. Amphibians are ectotherms and cannot regulate their body temperatures but are reliant on the temperatures of their environments. So how are the vernal pool amphibians that will be using wetlands as breeding sites within the next few months spending their winter​?
Ohio vernal pool amphibians start breeding as early as late January to early February in some years in southern Ohio counties. However, we see most years that vernal pool amphibians in southern and central Ohio start their breeding in late February or March with populations in northern Ohio breeding in late March to early April. Where and how amphibians are able to survive the winter to make it to their late winter/spring breeding pools can vary by species. Many have developed unique adaptions to the demands presented by winters in Ohio.
Some amphibian species spend the winter underwater in vernal pools and other aquatic resources, below the surface ice. This is true for the leopard frog, Lithobates pipiens, American bullfrog, L. catesbeianus, and green frog, L. clamitans. Within these aquatic resources, they lie on top of the pool bottom or bury themselves partially in the substrates. In the case of the American bullfrog and green frog, this can include their tadpoles. While their metabolism slows down significantly, the frogs and tadpoles can be seen moving around at times even under the ice. These species are able to remove enough oxygen from the water through their skin to remain alive. While pond, pool, or lake ice will be at 32o F, the water at the bottom is less cold and can range from the 35oF to 40o F, warm enough to avoid their bodies freezing. 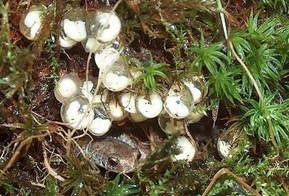 Most of the mole salamander species in this family use the abandoned burrows of small mammals or crayfish rather than digging their own. However, the eastern tiger salamander, Ohio’s largest terrestrial salamander, is a proficient digger and creates its own burrows and tunnels. Some of these excavations are as deep as 1.3 meters and other mole salamander species will use burrows that are up to one meter in depth. Passing wintertime at these depths keeps them below the frost line and warm enough to make it to the next breeding season. These species do not eat during winter. Instead, they rely on their accumulated fat reserves to meet the minimal energy requirements demanded for low temperature existence. In fact, these Ambystomatid species do not eat until after they have bred in the spring.

Spotted Salamander
The American toad, Anaxyrus americanus, and Fowler’s toad, A. fowleri, are also adapted to be excavators and construct burrows in the fall deep enough to keep them at temperatures above freezing. The highly fossorial eastern spadefoot, Scaphiopus holbrookii, is a state endangered species. Its range is the sandy floodplains of large rivers within the Ohio River watershed. This toad is Ohio’s fastest and most efficient digger among the amphibian species and can develop a sand capped burrow below the frost line within a very short time.

The wood frog, Lithobates sylvaticus, spring peeper, Pseudacris crucifer, western chorus frog, P. triseriata, mountain chorus frog, P. brachyphona, gray treefrog, Hyla versicolor, and Cope’s gray treefrog, H. chrysoscelis are not adapted to digging. Instead, they seek deep crevices in logs and rocks or tunnel down into the leaf litter. These practices often expose them to below freezing temperatures. However, they do not die. They have antifreeze, in the form of a high concentration of glucose, in their vital organs that prevents freezing. A partially frozen frog will stop breathing and its heart will stop beating. When their hibernaculum warms up, the frog’s frozen body parts will thaw and their lungs and heart will resume function. This revival makes it appear as though these individuals have risen from the dead. 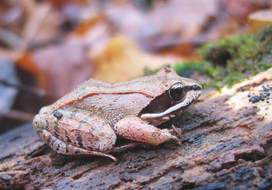 Wood Frog
The adaptations of this diverse group of animals enables them to survive through extreme winter conditions. This winter, when your home seems somewhat cold and you wonder if someone has been fooling around with the thermostat, remember it could be a lot worse.
​​
​By Mick Micacchion
Wetland Ecologist, PWS
Vice President, Ohio Wetlands Association
​Photos by Mick Micacchion