Vernal pools provide important breeding habitat for amphibians.
Hydrology—For most vernal pool amphibian species pools should be inundated from March through June, at a minimum, but must also dry down regularly to exclude fish and other amphibian predators.
Microhabitat—Pools with plenty of leaf litter, woody debris, plants, and microtopography support the food web and provide cover.
Forested Landscape—Forested or shrub landscapes surrounding a vernal pool are vital and should also contain other vernal pools to allow for genetic exchange and refuge in times of drought. For instance, spotted salamanders require a large percentage of the habitat within a 200 meter, and wood frogs a 1000 meter (776 acres), radius of the pool be forested.
Conservation—These habitats are disappearing and the species that depend on them are becoming rare. Existing habitats should be protected, and additional vernal pools should be restored to reverse the trend. Unfortunately, these are complex ecosystems that are difficult to replicate.

Salamanders - Order: Caudata (having a tail)

Life History
Most adult vernal pool salamanders migrate to pools in the late winter or early spring where they mate in groups. Males deposit spermatophores on the bottom of the pool and entice females, using aquatic courtship movements and releasing stimulatory chemicals, to pick up the sperm packet. Females then lay a mass of eggs, which swell as they absorb water. Adults leave the pools and return to their subterranean woodland retreats usually within a few days after mating and egg deposition. Eggs develop in 30-60 days, depending on species and water temperatures. Salamander larvae grow quickly and become top vernal pool predators They metamorphose, from gilled larvae to gill-less terrestrial juveniles, and leave the pool after about 2-3 months.

Mole salamanders spend most of their life below the soil surface and have lungs used for respiration.

Large family of stream and terrestrial salamanders that breathe through their skin. Only one vernal pool breeding species. 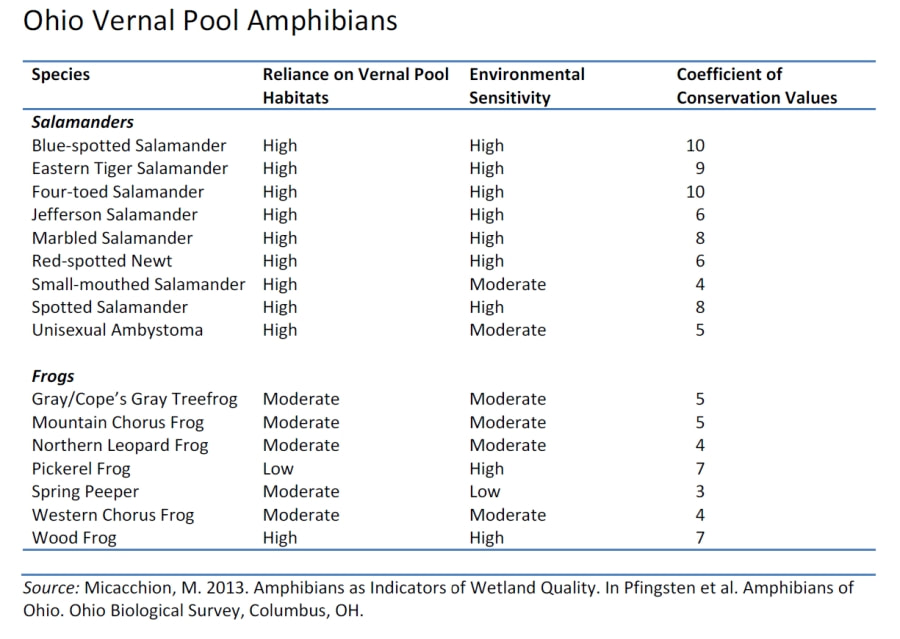 All photos by Mick Micacchion